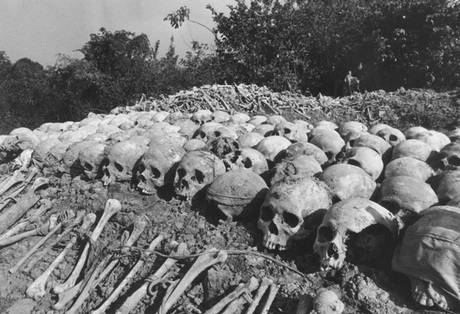 In the four years that Khmer Rouge came in power, it was known as one of the worst mass killings of the 20th Century.

Million Cambodians were ordered out of town to work on lands. Almost 2 millions Cambodians died of starvation, disease and overwork, while others were tortured and killed. Their bodies buried in graves that became known as killing fields . There is a movie about this genocide, it is called The Killing Fields.

Khmer Rouge soldiers were young and most of them were uneducated teenager boy who had never been in Phnom Penh before. Pol pot was educated in France and he inspired by Mao Zedong’s Cultural Revolution of communist of China. Once Pol pot came to power, he and his soldiers quickly set about transforming Cambodia into what they hoped would be an agrarian utopia, which he renamed the Democratic Republic of Kampuchea. Clearly known that the nation would start again at Year Zero and began to purify society. Religion and all foreigners were to be extinguished. Embassies were shut down. All the businesses were told to closed. The foreign languages were not allowed to use. Factories, schools, universities and all other institutions were all shut down. No more education. Healthcare disappeared. News was no longer publicise and the communication through mail or phone was limited. Any economic from other countries was rejected. Therefore Cambodia became sealed off from the outside world.

Every city was forcibly evacuated. Approximately two millions people from a city called Phnom Penh, had to leave the city to the the countryside to work as slave. It was estimated that around 20,000 Cambodian people died on the way. They were forced to work hard in rural areas. Most of the rice that was grown was fed to the Khmer rouge and was exported abroad in exchange for military weapons, only little remained to those Cambodian who were working hard. Many people were left with virtually nothing to eat and had to work the whole day but had only watery rice porridge to eat and secretly tried to supplement their diets by eating roots, leaves and insects. As they didn’t get enough foods to feed their stomach, they started to have disease, starvation and being overworked. Hundreds of thousands of people died of that.

Pol Pot and the Khmer Rouge leadership had been planning to evacuate Phnom Penh since the early 1970s. Foreigners were ordered out of the country. Soldiers and officials of the Khmer Republic were immediately executed. Everybody even young and old people, the people who were sick or not, was ordered to leave the city immediately to engage in agricultural activities. Many people died on the way to the working areas. The people who were sick, did not have much drugs to cure the sickness. The women who were pregnant had to give birth on the way, if they managed to survive. The capital was almost entirely vacated, with the exception of a few factories and a number of embassies of countries who were friendly to the Khmer Rouge, including China and Yugoslavia. Many schools were turned into animal farms or prisons. The most infamous prison was S-21 which was a high school called Toul Svay Prey high school. The people who entered in S-21, they never returned. They were killed in different methods.

The people who were well educated or wealthy and based on their occupation, such as teachers, police, doctors, lawyers, journalists, members of upper class, popular singers and former government officials. They all were killed along with their family. This was the reason why some people had to lied to Pol pot that they are just normal people. This lie helped them avoid the deadness in the Khmer Rouge years. Also anyone that disloyalty to Pol pot, which including his many Khmer Rouge servants were also killed. Some Cambodians had to dig their own grave before they got killed, while the bodies of others were left where they fell.